Upgrading The 60/40 Portfolio With Alternatives

Recent headlines would have investors believe that the 60/40 portfolio, a mainstay of successful retirement plans for decades, is dead.

Historically low yields have made the income element of an asset allocation difficult to manage. As we head into a period in which bond returns are likely to be lackluster, the absence of total return on the bond side has many investors looking for the exits. But before we all organize a paddle out or a second line, there is another approach.

Institutions began rethinking their asset allocations decades ago. With their access to research, sophisticated management and scale, they began to incorporate alternatives into their investment process with the goal of maintaining a given level of risk but creating the potential for maximum return. The research often centered on building a portfolio that still followed the principles of modern portfolio theory, as exemplified by the efficient frontier.

The goal of the efficient frontier is to construct a portfolio of multiple asset classes that will maximize returns for a given level of risk. The performance of any one asset class isn’t as important as how the entire portfolio performs together. When alternatives are added to the portfolio, they move the entire curve up on the return spectrum, while maintaining the risk profile. 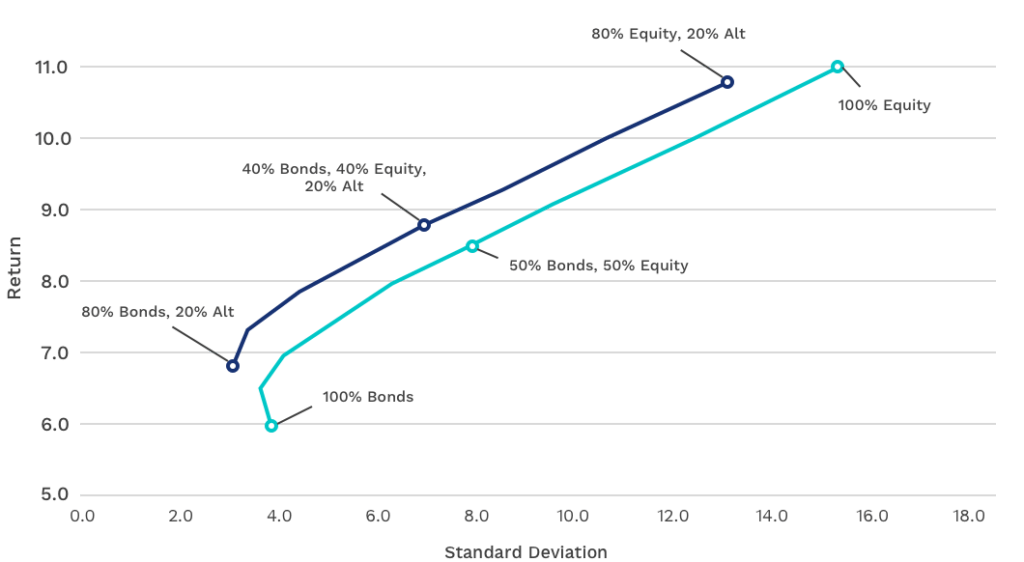 The basis for the asset allocation exemplified by the efficient frontier is the principle of diversification, famously called “the only free lunch in investing” by Nobel Prize laureate Harry Markowitz. And the core of diversification is building a portfolio with uncorrelated assets.

The relationship between equities and bonds over the last twenty years has been one of negative correlation, meaning that they move in opposite directions to each other. This has created a natural hedge on each position such that when one is down the other is up.

It isn’t a given, though. Before 2000, stocks and bonds were positively correlated. And recently, they’ve been partying like it’s 1999.

While obviously not conclusive, the current environment of rising rates and higher inflation, or even just interest rate variability as rates bounce around and inflation spikes, may be contributing to the switch to positive correlation.

The Data is in On Alts

The Alternative Investment Management Association reports that the average public/private pension fund allocates approximately 19% to alternatives. On the individual wealth side, the Capgemini World Wealth Report cites an allocation of approximately 10-15% over the past several years.

The chart below categorizes popular alternatives by their use in an investment portfolio and whether they are liquid or illiquid. 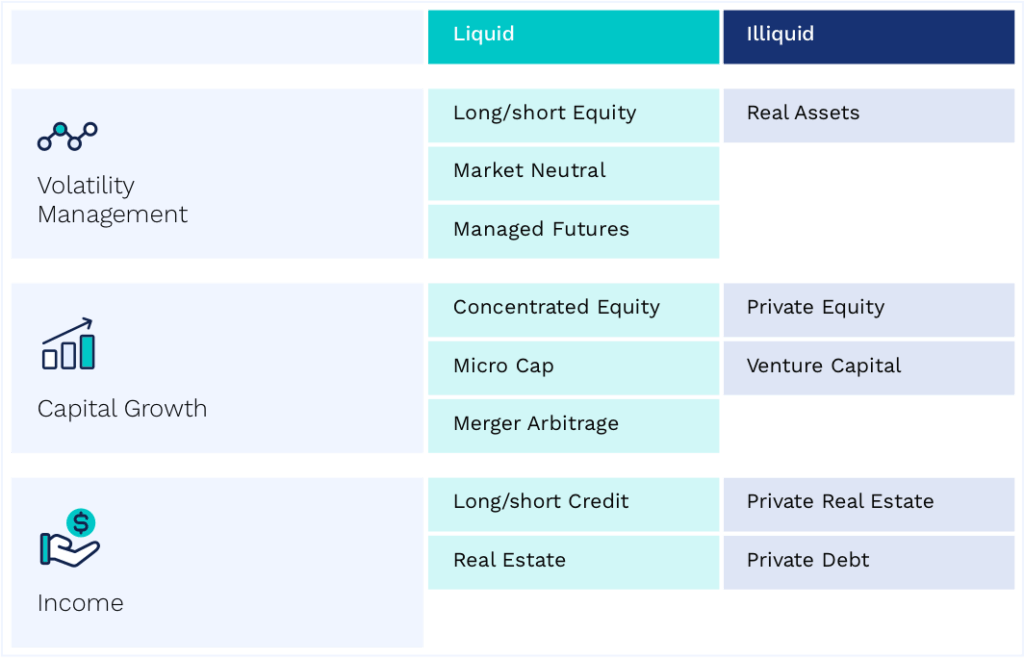 Alts Aren’t New, But Income Alts May Be

Investors who incorporate alts in their portfolios are for the most part seeking diversification and the opportunity to enhance return, according to a recent survey.2 However, a new reason is emerging – income. Thirty-six percent of wealth advisors who responded to the survey reported that they use alternatives primarily for income.

What is causing this sea-change in alternatives usage? There’s both a “push” and a “pull” element. The push for investors is that with yields at historic lows, they’ve been forced to move beyond a traditional fixed-income allocation to meet income needs. The pull is that the credit spectrum has expanded and income options that offer enhanced yield with acceptable levels of risk are now available.

Investors are increasingly looking outside the traditional fixed-income world into private credit, also called private debt. The asset class comprises loans made to companies by non-bank lenders. The companies are usually described as the “middle market,” with revenues between $10mm and $1billion. Because of their size, these companies often cannot access the capital markets.

The non-bank lenders are generally institutional asset managers or specialty finance funds such as BDCs, who have proven expertise in originating these types of loans. They research the market, the companies and the financial prospects of the sector, they perform extensive due diligence and are experts in structuring the loans. These loans often have floating rates, so they can mitigate interest rate risk, and are typically senior in the capital structure of the company.

THE GROWTH OF PRIVATE CREDIT

Private debt has already achieved significant scale as an asset class. Total assets at the end of 2020 were $848 billion, according to a recent survey by Preqin. The survey looked at future growth prospects too, and found that assets are projected to increase 11.4% annually, to $1.46 trillion at the end of 2025.3 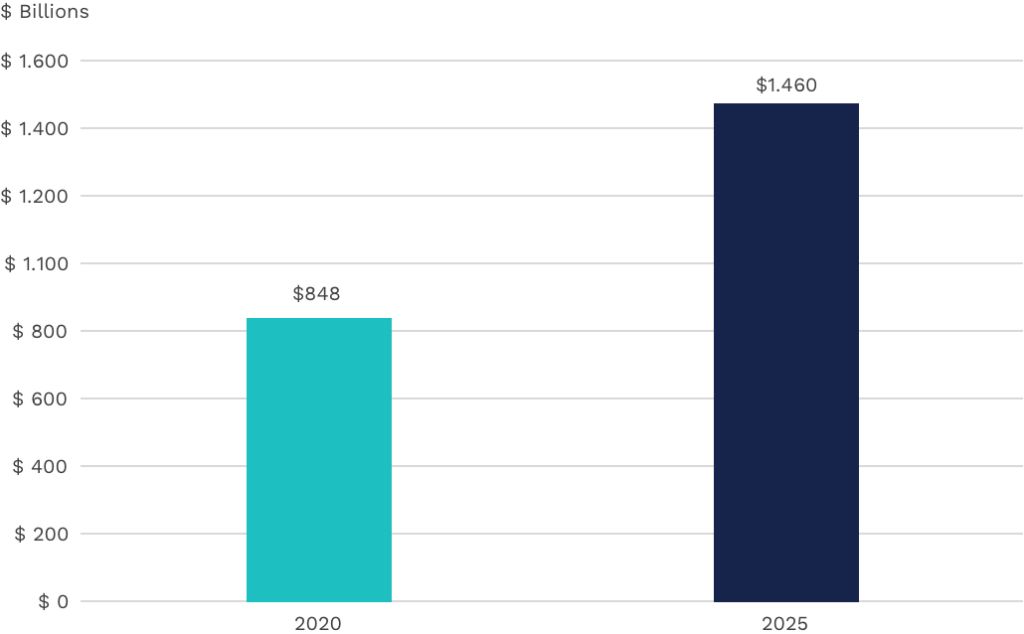 What’s driving the growth? A recent survey of institutions, private wealth and intermediaries provides an enlightening picture of the landscape for private credit.4 Over 90% of surveyed investors reported being satisfied with how their private credit portfolios held up in 2020, more than any other alternative asset class. Thirty-eight percent of investors responding to the survey stated that they would be increasing their allocation to private credit in 2021. 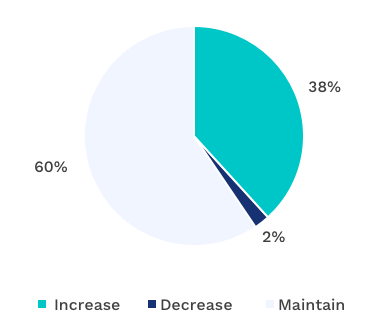 WHERE IS THE INCREASED ALLOCATION COMING FROM?

But the appeal goes beyond the enhanced yield; investors also valued the increased portfolio diversification that private credit can offer.

Individual investors are incorporating alternatives into their portfolios on the income side, as traditional fixed income investments remain under pressure. But even beyond enhanced yield, there’s a recognition that the asset class has other features that can help to create a modern, diversified portfolio.

November 2021 Credit Market Update:
A Funny Thing Happened on the Way to 2% Yields.