Growing fear of a coronavirus pandemic sparked a pullback in equity markets in January, but the first two weeks of February provided some relief. Markets rose on the Fed’s economic outlook comments, and good news on earnings provided enough buoyancy to set some record highs.

Beginning with the short holiday week, the news cycle began to be unrelentingly negative as the reality of the outbreak in the U.S. was communicated by the World Health Organization (WHO) and the Centers for Disease Control (CDC). The S&P 500 headed into correction territory (a decline of 10% or more). The seven-day decline of 13% from the all-time high notched on Wednesday, February 19th marked the fastest correction on record.

All eleven sectors of the S&P 500 (the S&P organizes all public companies into industry groups) experienced losses of at least 9%, with more than half declining more than the overall market. It was a complete rout, with very little dispersion between growth, value, cyclical, and defensive.

The flip side of the positive performance story is the precipitous drop in yields – and what that bodes for the overall economy. The 10-year U.S. Treasury fell 40 bps in February to a record low of 1.12%, as investors registered concerns that the ongoing pandemic would at best dampen growth and at worst lead to recession. Investors priced in the likelihood that the Federal Reserve would ride to the rescue with an interest rate cut to compensate for the effects of the coronavirus. And they did – with an emergency cut of 50 bps on March 3, the first emergency cut since the crisis of 2008.

At this point (March 9th), the yield curve remains inverted. Ten-year U.S. Treasury yields have broken below 1.00% for the first time ever and are hovering there. The market is expecting further cuts on or before the regularly scheduled Fed meeting on March 18th, and at least two further cuts before year end.

For companies with $1bn and above in annual revenue, there’s an equal number of publicly and privately held companies. Once you go smaller – the overwhelming vastness of the private market is revealed.

Number of Public vs Private Companies, By Revenue 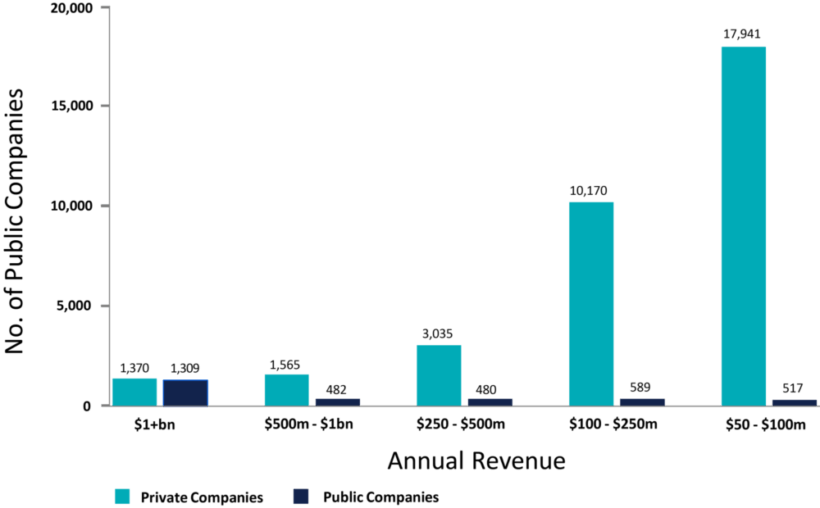 Shortwave: What We're Tracking in March

As its core customer ages, Harley Davidson struggles to attract a new generation.

The moon was lonely up there, so now it’s got a new friend.

Exploitation of emerging technologies, replacement of the human workforce, and a new world order are just a few of the trends we’ll all be grappling with.

Diversification is critical when volatility hits – we’ve got a short read on the evolving story of European private credit.

Tuning up your portfolio to potentially smooth choppy performance is all about adding income. We break it down.

Our Advisor Minute this month features Mitch Goldstein, co-Head of Credit at Ares Management, discussing increasing volatility and what it takes to seize opportunities as dislocations get tighter.

Commute Longer Than the Signal? We Got You.