Edition 14: We Will Meet Again.

Signal Strength: Interrupted.
Shutting down the country in an attempt to flatten the curve of the coronavirus pandemic has devastated the economy.

March was essentially the first three acts of a Shakespearian drama. We saw a gathering storm as the pandemic began to break across America in Act 1. Act 2 was the market reacting as the seriousness of the coronavirus became clear and mandatory shutdowns rolled across the country, probably saving lives but devastating the economy. Act 3 was the response: the largest government stimulus in history, at over 10% of GDP.

On March 16th, the VIX index – the so-called “fear index” that is a measure of market volatility – hit a high of 82.6 and remained above 40 for the rest of the month. By March 23rd, the nadir of the bear market was reached with the S&P 500 34% below the February peak.  A rebound at the end of the month as the stimulus passed both houses of Congress pushed values higher, but not enough to turn positive and still technically bear territory.

As investors fled risk assets, the yield on the 10 year U.S. Treasury dropped to a historic low of .34%. Fixed income markets were threatened with seizing up, but the Federal Reserve was up to the challenge of creating liquidity. Starting with an emergency cut of 50 bps on March 3rd, the Fed followed that with a 100 bps cut on Sunday March 15th, bringing rates to the zero bound.

And they weren’t done. Quantitative Easing (QE) is back in a big way. On March 23rd, the Fed announced “unlimited purchases” of Treasuries and mortgage-backed securities, while adding Agency Mortgage Backed Securities to the list of eligible purchases. QE purchases ramped up so significantly that in just over two weeks, the Fed’s balance sheet has ballooned to its largest size ever: $5.25 trillion. In April the Fed announced further support measures, with nine additional lending programs totaling $2.3 trillion aimed at supporting states, municipalities, and riskier corporate debt.

The Fed’s immediate and thorough backstopping of the bond markets was effective, but for the equity markets the catalyst was the largest stimulus package in U.S. history. The $2.2 trillion CARES Act was passed in record time to help businesses survive the quarantine. While the success of the roll out remains to be seen, the government’s will to provide aid to all sectors of the economy and directly to Americans – including the most vulnerable – bodes well for the projected recovery once the virus has abated and we can begin to reopen.

So, for Act 4 and Act 5? Act 4 is the battle. Our crucial essential personnel are caring for the sick and keeping our supply lines functioning. We are all united in doing our part so we can flatten the curve and be together again. We all, with what resources we have, fight together. And with testing facilities eventually ramped up, we might be able to go back to work. Stimulus kicks in, markets hopefully stabilize. Act 5 is the resolution, where we can celebrate a reopened country.

Initial jobless claims resulting from shutting down the economy were literally off the charts. 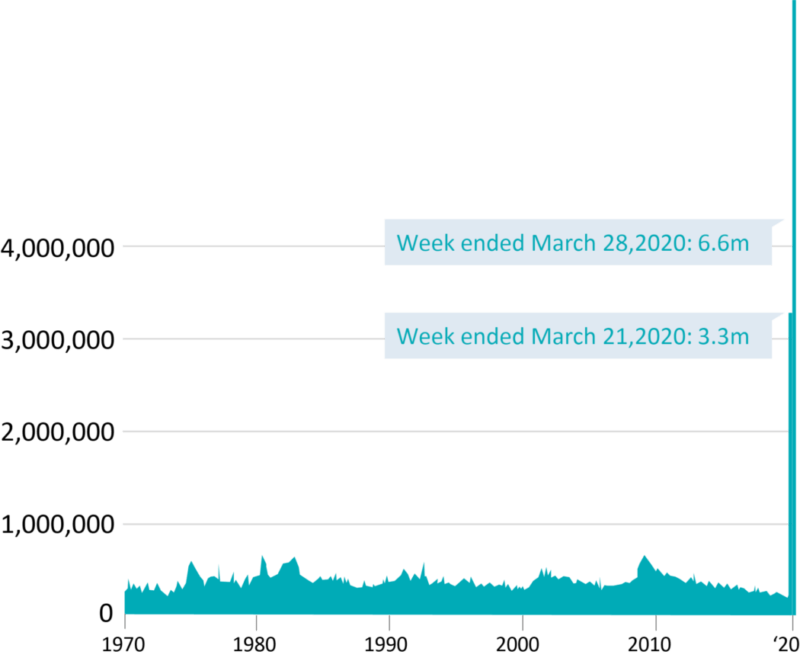 Shortwave: What We're Tracking in April

McKinsey & Company has come up with a framework to guide businesses as they evolve during the coronavirus crisis.

We will get through this – but the world is likely to look different, both from an economic standpoint and in terms of human behavior.

Some timely advice on Zoom etiquette – and tips on getting a good camera angle.

We often talk about the benefits of diversification, but in light of the dislocation in credit markets, it’s even more important. We provide some insight on where yield can be found.

We sat down for an in-depth discussion about the credit markets with our co-CEO, Mark Gatto, and Greg Margolies, the Head of Markets at Ares. We go deep and wide to understand the recent volatility and where asset classes are headed.

If history holds, credit markets may be poised for rebound. We break it down by asset class.