Signal Strength: Strong.
Markets turned in positive performance even as the country erupted in protests.

Careful and cautious were the watchwords of the first three weeks of May. States began to reopen, with non-essential businesses revising their physical spaces and business models to accommodate the new reality. By the end of the month, no new hotspots or major spikes had emerged. Existing hotspots – like New York City – saw immense progress. Across the country, people gingerly poked their heads out of doorways and prepared to slowly test the waters of recovery.

All that changed on May 25th, when George Floyd died in police custody in Minneapolis. Protests began on May 26th and have not stopped (as of June 12th). Tens of thousands around the country took to the streets in protest together. Big cities and small towns that canceled Memorial Day parades out of concerns about the virus saw their citizens marching in support of change. Whether this has an ongoing impact on the recovery efforts in the months ahead remains to be seen.

How did all of this translate to the markets?

Equities continued the momentum that began in April. The markets seemed to focus on positive news about potential coronavirus vaccines, as well as optimism that recovery was underway as states reopened non-essential businesses. The data itself told a different story. U.S. corporate earnings contracted by approximately 14% for the first quarter vs the same quarter in 2019. The equity market shrugged off the ongoing evidence of recession, and by the end of the month the S&P 500 had risen by 4.8%, recovering all but 10% of its February peak value.

The Federal Reserve continued to backstop markets, both through ongoing asset purchases and by strongly messaging the commitment to helping along the recovery. The Fed took every opportunity to emphasize that it is not out of tools and that they intend to keep rates low as long as needed.

The 10yr Treasury yield was essentially unchanged in May, ending the month at 0.64%. The 30yr Treasury yield rose by 13 basis points to end at 1.40%, which steepened the curve slightly. For the second month in row, spreads tightened on strong demand. All credit sectors except Treasuries had positive performance for the month, reflecting the shift to a more “risk-on” stance.

Unemployment numbers for May, released in June, showed a shock surprise to the upside as the economy added 2.5 million jobs and the unemployment rate fell. The message is clear that the economy, at least, may be out of the woods.

Employment spiked in May to the upside, adding 2.5 million jobs against expectations for a further 8 million decline. 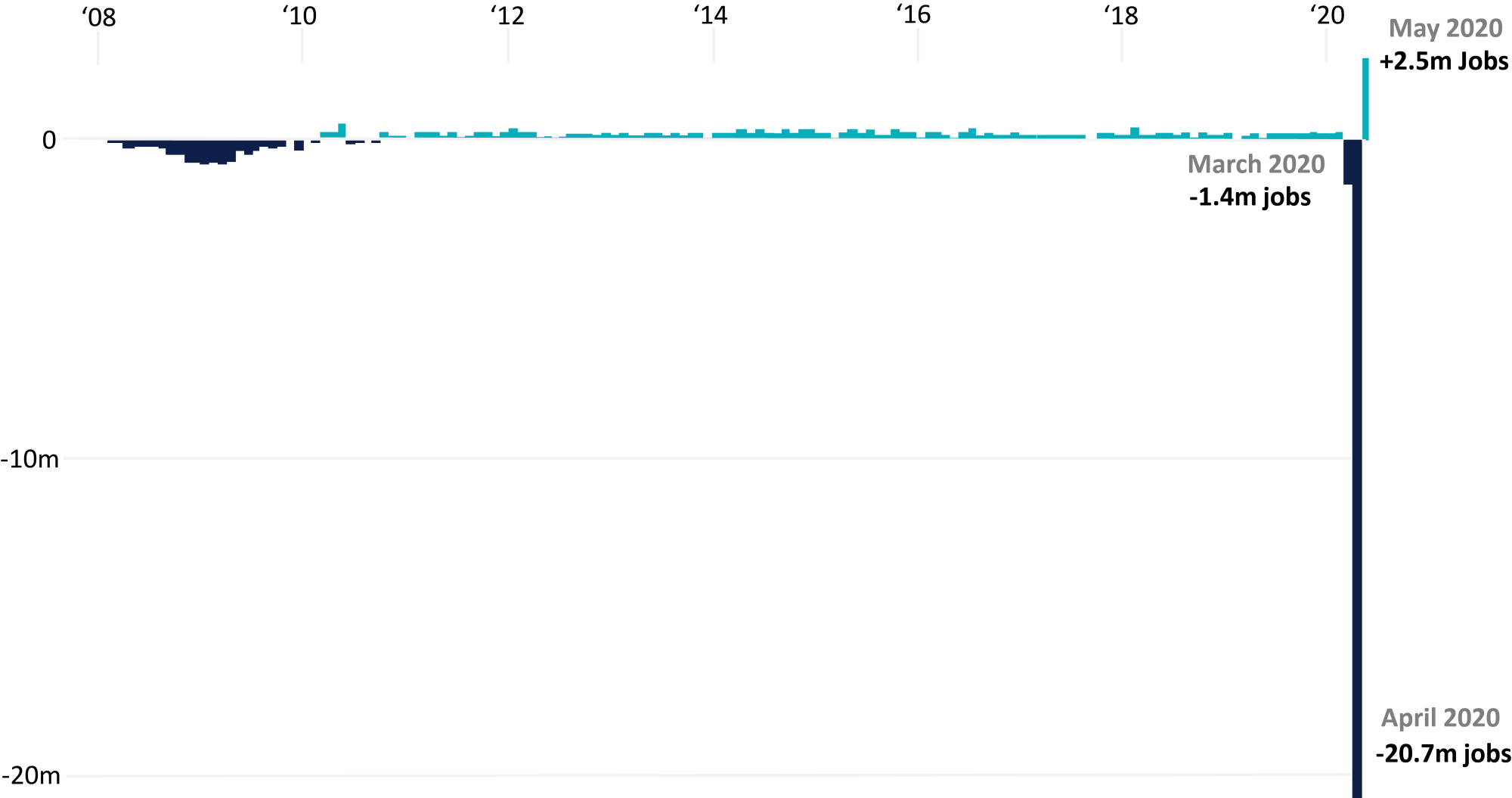 Shortwave: What We're Tracking in June

Of all the impacts of the shuttering of the economy, one of the most difficult to predict for in the recovery is the real estate market, as there are other factors at play.

The recovery will be driven by consumer demand and the Fed has some good news.

Growth of cities was already slowing, but the coronavirus may accelerate that trend – and a surprising age group is leading the way.

The coronavirus recession has already seen increased market volatility, we’ve got some insights on adapting your portfolio to ride this out.

The modern credit spectrum includes a range of investable assets – we look at one option that may help smooth portfolio volatility in addition to providing yield.

Passive investing has had a good run, but current markets may be better suited to a steady hand on the wheel. This piece adds some interesting data in support of active investing.