Signal Strength: Temporarily jammed.
The first month of the year hummed along nicely until it didn’t, with the last two days of January erasing month-long gains in the S&P 500.

The Georgia run-off elections in early January resulted in a 50/50 Senate, which reshuffled the expectations for both an additional stimulus and other spending proposals, such as infrastructure. The third round $1.9 trillion stimulus package was officially unveiled mid-month.

The post-holiday increase in coronavirus cases, as reflected by the seven-day rolling average, peaked on January 8th at nearly 260,000 cases, but by February 3rd the number of cases had dropped to 136,442, a 47% decrease. At the same time, vaccinations began to ramp up and by the end of January, 31 million people had received at least one dose of the vaccine.

The combination of decreases in coronavirus cases, vaccine rollouts, along with the potential for stimulus contributed to an environment in which equity markets were (initially) as resilient as we’ve become accustomed to them being.

The S&P 500 posted positive returns for the first three weeks, and then the last week of the month saw a spike in volatility, as unprecedented social media driven trading around a handful of stocks ensued.  The index lost 3.7% in the last week of January leading to negative performance for the month.

Chairman Powell provided reassurance around the pace and duration of continued QE, noting that it was “premature” to discuss reducing the Fed’s pace of asset purchases. He focused on employment and inflation goals and said that it would be “some time” before the Fed began to slow down. This led market participants to infer that QE would likely remain in place throughout 2021.

In credit markets, the yield curve steepened modestly on the potential for an improved economic outlook and potentially higher inflation. This led to underperformance across most longer-term sectors. Investment grade corporates wasted no time in resetting expectations after last year’s outperformance with the Bloomberg Barclays U.S. Corporate Index down 1.28%. The massive issuance last year has pushed yields to record-lows, which is combined with historically high duration.

The rally in the U.S. leveraged loan market continued, with the Credit Suisse Leveraged Loan Total Return Index posting 1.26%.  In alternative credit, Private Debt Investor has published its annual survey. The asset class continues to attract institutional investment, with these investors increasing allocations by 33% since 2017. Projecting forward to 2021, 77% of institutional investors expect funds to meet or exceed their benchmarks.

The Fed doesn’t just measure the economy; it also measures the level of uncertainty about economic policy. The Economic Policy Uncertainty Index is newspaper-based and attempts to gauge uncertainty that may foreshadow declines in investment, output, and employment. What’s it showing? Uncertainty is heading to pre-pandemic levels. 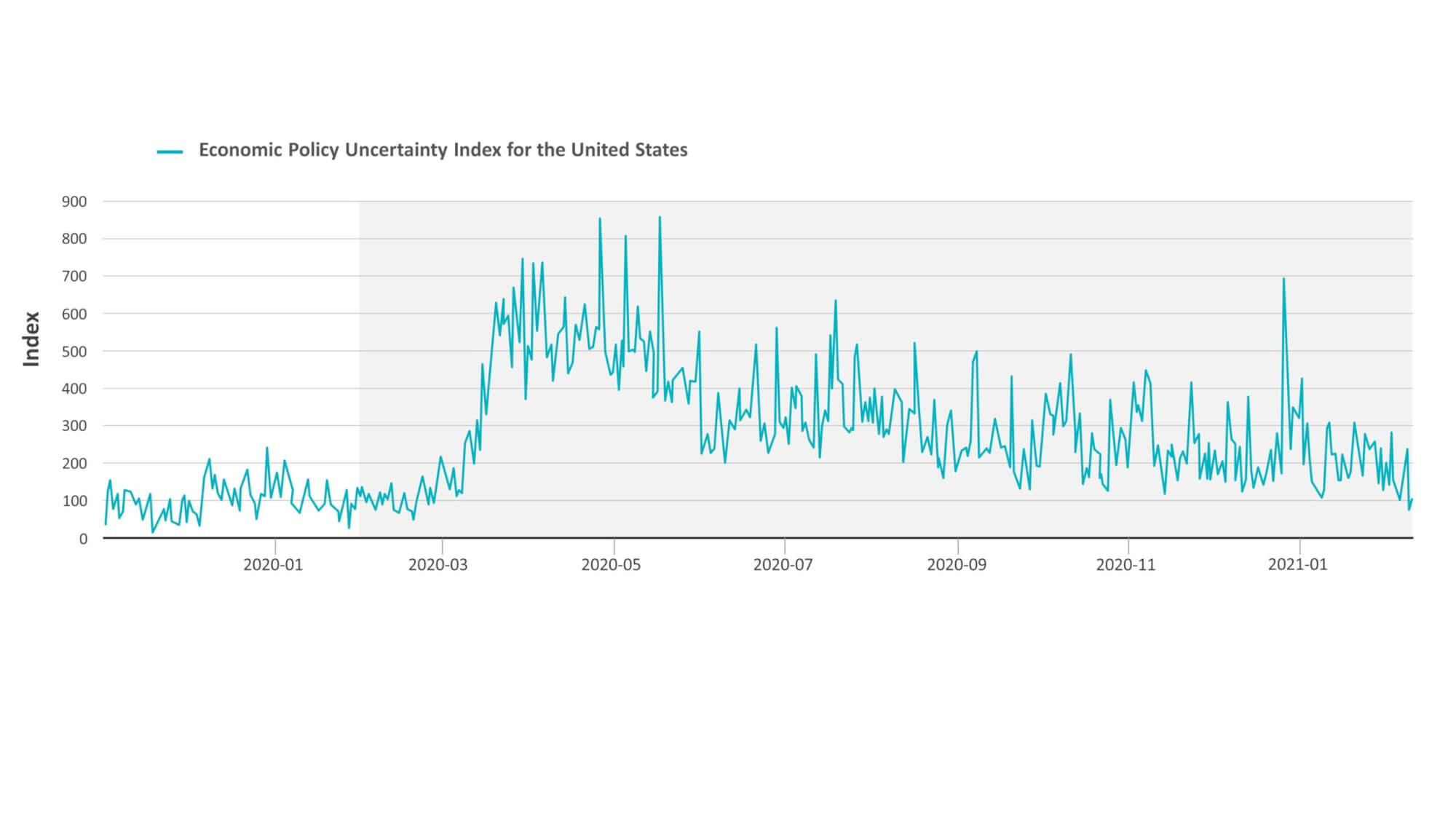 Shortwave: What We’re Tracking in February

Ford Foundation: Impact investors are rising to the challenges of COVID

Clubhouse: Audio is back - and it's invite-only. Everything you need to know about Clubhouse

The New Core: Total Return With a Kicker

Tactics to Boost Your Retirement Savings - If You're Over 50