Fall Sweeps In
Signal Strength. Risk-on was the winner. The equity and bond markets flipped back to non-correlation as most equity indices turned in a positive performance, while nearly all public bond sectors were negative.

August started with the release of a July employment report that showed 1.1 million new non-farm jobs had been added to the economy. A huge increase followed this in the ISM Services PMI index, which tracks non-manufacturing industries, as it jumped to 64.1 in July, a big increase over 60.1 in June. All 17 services industries reported growth, and the ISM Services Employment index rose to 53.8, from 49.3 in June, suggesting hiring conditions were improving. The passage of a bipartisan infrastructure package added to the upbeat mood.

And then the spread of the Delta variant became a surge swamping several states, even while previously lagging vaccination rates began to increase. Employment numbers released in early September made clear the Delta variant’s damage to the economy.

The evidence on the ground and from the data is that the recovery remains vulnerable. But the other lesson is that it responds quickly to changing situations.

In his remarks in Jackson Hole, Chairman Powell highlighted the strong July employment report as the basis for the recovering economy. He indicated the timeline for beginning to taper the monthly $120 billion in bond purchases was likely towards the end of the year. He also clearly separated tapering from a rate increase designed to curb inflation, by saying that raising rates would require a “different and substantially more stringent test.”

With the downside surprise in August employment and the possibility that September may also be lackluster, the timelines for both tapering and rate increases may be lengthened.

Equity markets continued to shrug off negative news. The month of August had 22 trading days, and the market posted new closing highs on 12 of them.  Ten of the eleven S&P 500 sectors gained, with Financials recovering from a loss last month to post the best performance, and Communication Services following right behind. Real Estate is the best performing sector in the index YTD. Energy declined, but less than last month, and is still up 26.60% YTD.

Apart from high yield, most fixed income sectors were negative for the month. U.S. Treasury yields in the middle-to-long end of the curve increased modestly, while the short end was unchanged, and the 30-year saw only a four-basis-point increase. The Bloomberg Barclays U.S. Corporate Investment Grade Index returned -0.30% for August, consigning the index back to negative year-to-date territory.

In alternative credit, default rates for middle-market loans continue to fall, indicating strength, especially in direct lending portfolios. The Proskauer Private Credit Default Index suggests that the default rate for companies with at least $50 million in EBITDA fell to just 1.0% in Q1 2021, compared to a high of 5.3% in Q2 2020.

The secondary loan market returned to the black as heightened investor demand pushed CLO formation to record levels in August. The S&P LSTA Leveraged Loan Index (LLI) returned 0.47% in August, after July registered the first negative return reading of 2021, albeit a mere -0.01%. YTD returns now stand at 3.76%, compared to the same period last year when YTD returns were in the red at -1.29%.

Given low yields and struggling returns in many public credit sectors, investors are increasingly looking to add alternatives to portfolio allocations. Over the period from 2011 to 2020, adding a 10% private credit allocation to a portfolio of public corporate bonds would have improved the return while reducing volatility, resulting in an improved Sharpe ratio. 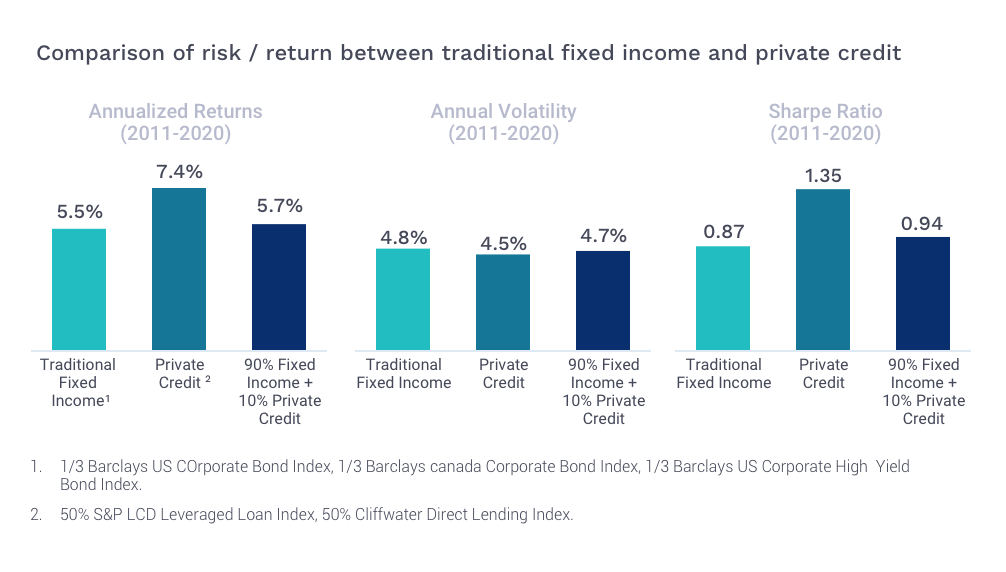 Shortwave: What We’re Tracking in September

Time to declare a major? This ranking combines job projections out to 2030 with 2020 wage data to find 30 high-paying jobs with growth potential.

Plant-based goes beyond the impossible: Michelin stars. The newest dining trend sets an interesting challenge for chefs and diners alike.

Credit Market Update with Ares Management – Vanishing Yield, Where to Turn? Our recent on-demand webinar with Greg Margolies, Ares Head of Markets, looks at the road ahead.

Income funds are just what they sound like, an investment vehicle that focuses on assets that provide an income stream. We dive into the details.

Our short read breaks down how interval funds work and why the structure can create a match between a long-term strategy and investor desire for some level of liquidity.