Edition 32: No More Spiking the Punchbowl?

Positive economic data from the Fed’s Beige Book and rising consumer sentiment, as reflected by the University of Michigan survey, belied a lower-than-expected 2.0% third quarter GDP reading. It’s important to note that GDP growth is still positive, it’s just disappointing in relation to the 6.7% reading in the second quarter. The ongoing challenges to the supply chain as well continuing scarcity in the labor markets are weighing on the economic recovery.

The Fed must balance their data-driven approach to inflation with the very real possibility of raising rates too soon, which would stifle growth. The balancing act is complicated by the start of the long-anticipated withdrawal of government support of the bond markets, which was announced on November 3rd. Tapering will begin later this month with an initial decrease of $10 billion in U.S. Treasury purchases and a decrease of $5 billion in mortgage-backed securities, from the current monthly purchase amount of $80 billion Treasury securities and $40 billion mortgage-backed securities.

Towards the end of the month, the yield curve inverted slightly when the 20-year Treasury yield rose above the 30-year yield several times. This was largely attributed to demand for more-liquid 30-year bonds and the expectation that the Fed meeting in November would reveal a more hawkish tone. Year-to-date the major fixed income sectors are still in the red, except for municipals. But they’re just squeaking by at .50%.
October notched another strong month in CLO issuance, with 39 deals totaling $19.15 billion, a hair behind August’s record $19.22 billion primary-market issuance. Annual new-issue volume of $149.37 billion through October 29th reflects the record-setting pace of deals this year. The CLO market also saw a milestone in October as the first U.S. CLO issuer priced a note tranche tied to the Federal Reserve-published secured overnight financing rate, SOFR, the replacement for LIBOR.

Private debt has been in the headlines recently as the asset class demonstrated resiliency throughout the pandemic and investors in search of yield are turning to alternatives. S&P Global has taken a close look at private debt with a recent report comparing it to syndicated loans. The report highlights several key differences:

Foreclosure rates are at historic lows as borrowers have had more time to repair balance sheets. Tighter lending standards in recent years and increases in wage growth in 2021 also may have played a role. Loans are continuing to go through the forbearance process, which will likely impact this rate. 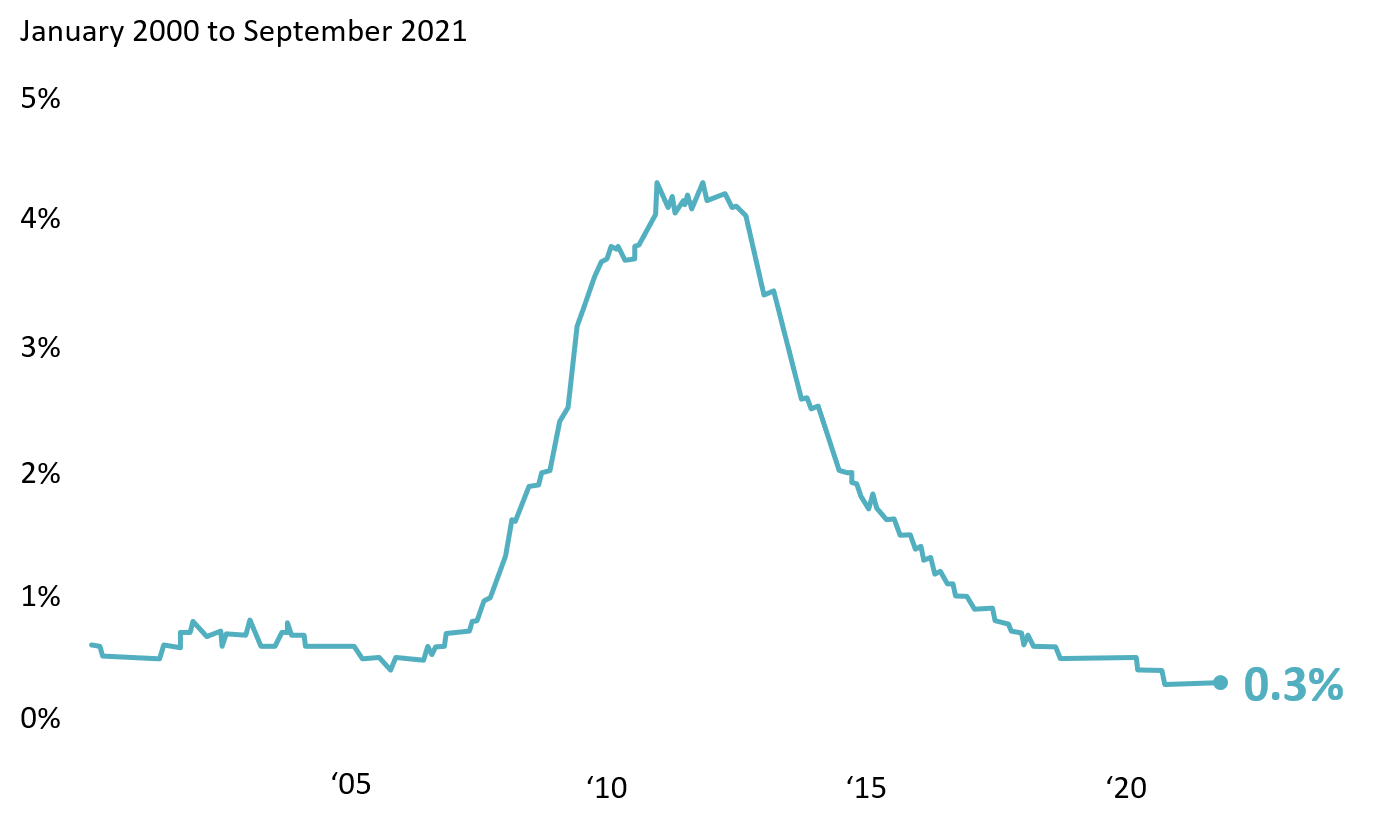 Shortwave: What We’re Tracking in November

The Great Resignation might be the start of the Great Reshuffling, as changes to work and life habits potentially spark lasting improvements. This short read takes a historical view.

The link between speculative-rated companies and defaults is currently broken, as the number of CCC credits has risen while defaults have fallen. This read breaks it down in some good charts.

Right on schedule with a holiday trends piece, and we went old school with Martha Stewart to keep you au courant.

The CION Credit Commentary tackles the data releases in October, the latest Fed moves and the challenges going forward.

Is the “middle market” moving up in size? What does Ares see happening to the size of the deals it is originating? Ares’ Head of Markets, Greg Margolies, shares his thoughts.

With many sectors of the bond markets in the red year-to-date, the concept of total return has taken a hit this year. Our short read has an alternative suggestion.