The October jobs report, released in early November, exceeded expectations. It set a tone of optimism that the recovery was getting back on track after a summer of dealing with the Delta variant. Later in the month, the Fed put numbers and timing around the long-awaited tapering process, announcing that it would begin reducing bond purchases in November.

The program is now anticipated to end in summer 2022, and the relatively small monthly decreases are meant to provide a very smooth ride that hopefully won’t jolt markets. Data releases throughout the month remained relatively positive as the holiday season and Black Friday approached.

Reports of the Omicron variant on Thanksgiving weekend ushered in uncertainty that rattled markets. Travel restrictions that were finally lifted just weeks ago could potentially be reimposed, and some municipalities are already going back to more stringent guidance on protective behavior.

However, the focus of markets doesn’t seem to be on the latest COVID development. Instead, rising inflation and Federal Reserve Chairman Powell’s retiring of the “transitory” language are highlighting a new reality. Headline CPI is up dramatically. The October numbers (the most recent available) released by the Bureau of Labor Statistics showed that the Consumer Price Index rose 0.9% for the month and 6.2% year-over-year. That increase was the largest since 1991.  The factors driving inflation seem to be directly related to the demand for goods that is not being met due to supply chain disruptions and labor force shortages. Does this interpretation hold up in the data?

The Brookings Institute looked at one-year CPI growth from January 2018-October 2021, breaking out Core Goods and Core Services separately. Core Goods was under 2% at the beginning of the year and is now over 8%. Core Services dipped during 2020 but has recovered to the pre-pandemic level of just over 2%. Services are a large contributor to the economy, and prices are holding steady. As long as supply chain and labor disruptions resolve in the near term, Services and Goods inflation may regain a parallel path.

The 10-year U.S. Treasury ended the month at a yield of 1.43%, a drop from the high of 1.67% reached shortly before news of the Omicron variant broke. The Bloomberg Barclays U.S. Aggregate Index was slightly positive at 0.29% return but is still negative year-to-date with a return of -1.28%. As represented by the Bloomberg Municipal Bond Index, municipal bonds returned 0.85% for a year-to-date return of 1.35%.

Leveraged loans rallied in the first three weeks of November, with the S&P/LSTA Leveraged Loan Index rising 0.23% in the month to Nov. 21. Concerns over the Omicron COVID-19 variant led to a widespread sell-off after Thanksgiving, with the index losing 0.31% in the final five days of November. Unsurprisingly, sectors related to travel and leisure took the heaviest hit. This post-Thanksgiving volatility pushed the overall November return into the red, with the S&P/LSTA Leveraged Loan Index down 0.16%, only the third negative reading since March 2020. On average, loans have gained 0.40% per month this year.

Private debt continues see growth in demand. Global private debt assets under management have more than doubled from just over US$500bn in 2015 to US$1.1trn at the end of March, according to data provider Preqin. This has outstripped growth rates in public corporate bond markets over that period. The asset class has largely been the province of specialized alternative asset managers, who have been working in the space for decades.

These alternative assets managers have the advantage of significant on-the-ground experience and have been able to capitalize as the number of deals has increased in recent years. Preqin reports that the greatest asset raise by one firm in the decade leading up to 2021 was $37 billion – roughly the same as the next three largest firms combined.

With continued low yields compounded by inflation that is no longer considered “transitory,” investors from institutional to retail are looking at alternatives to traditional fixed-income products. The growth of private debt funds reflects that demand. 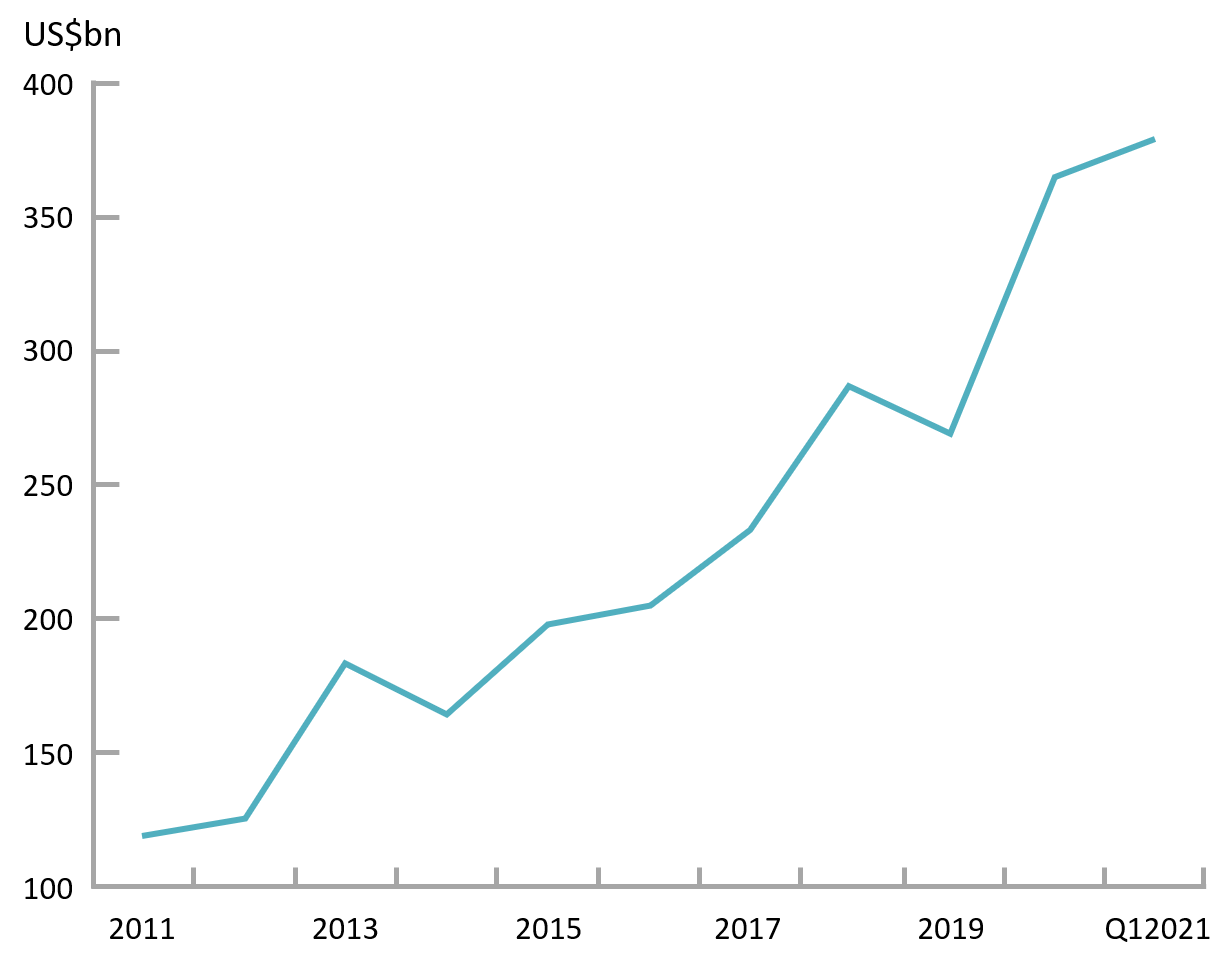 Shortwave: What We’re Tracking in December

Supply chain vulnerability is at the center of business planning now. McKinsey has a comprehensive report on how businesses are addressing resourcing and strategic planning.

NFTs are revolutionizing the art world, at least virtually. But what about making real art into an NFT? This short piece follows the attempt to monetize a painting while still maintaining ownership.

The stars are cooperating with the puny humans’ attempts to light up the darkness of the shortest days of the year. The Geminid meteor shower will be here soon.

The CION Credit Commentary takes a look at what drove markets last month, and what might be in store coming up.

Has the resiliency of private credit throughout the pandemic changed investors’ focus on covenants in private credit loans? Ares’ Head of Markets, Greg Margolies, shares his view.

Reviewing your portfolio for what worked and what didn’t in the last year, and adjusting your allocation for next year, is on the agenda for many investors. We take a look at ways to expand your portfolio with alternatives.