Edition 35: The Return of the Flattening Curve

The Return of the Flattening Curve
Signal Definer: Haywire. Equity markets reacted badly to the prospect of a much more aggressive Fed, while the short end of the yield curve was the beneficiary of anticipated higher rates.

Chairman Powell’s remarks were most notable for what they left out. Powell said that the Fed is undecided on the pace of subsequent increases after raising rates in March. Powell did not rule out raising by more than a quarter percentage point, which the Fed has not done since 2000.

He also left open the possibility of raising rates at consecutive meetings, which is also relatively rare. These moves would result in rates rising faster and higher than current projections. The third area of uncertainty is when the Fed will reduce the massive balance sheet it built up while providing liquidity to the markets.

It wasn’t all uncertainty and gloom. The U.S. economy had a 6.9% annual growth rate in the last quarter of 2021. This was the most robust growth over an entire calendar year since 1984 and was ahead of expectations of 5.3%. Headline GDP was good news, but the data shows more broad-based strength than we saw for much of 2021. The services spending increase of 4.7% reflected improvement in the sector and a return to a more balanced economy, as durable goods were only up 0.5%.

Data released in early February contributed to the market’s pessimistic outlook on assets that will be impacted by rising rates. The January non-farm payroll employment report released by the U.S. Bureau of Labor Statistics was very positive to the upside, with 467,000 jobs created in January, against consensus expectations for 150,000 new jobs. The economy’s resilience came as a surprise to some observers, who had feared that the Omicron spikes would potentially result in a contraction of the labor market. A stronger economy would likely lead the Fed to be more aggressive on inflation.

The release of a 7.5% CPI number was a shock that resulted in a more pronounced flattening of the yield curve, as the two-year gained 24 basis points on the day of the release. Futures markets began pricing in a near-certainty of a 50-basis point increase in the Fed’s key short-term rate. Investor fears of a flattening curve that turns into an inverted curve (don’t say the “R” word) are likely overblown. The Fed has been consistently transparent and Powell is making every effort to allow markets to adjust as he ratchets rates higher.

Monthly intraday volatility as measured by the daily high/low increased to 2.06% from last month’s 1.29%. The S&P 500 was down broadly, with only one sector gaining. Energy was up 18.97% for the month; Financials declined the least, just barely negative at -0.08%. Consumer discretionary was the worst performer for the month, losing 9.70%.

In structured credit, S&P Global reports that institutional leveraged loan volume at $71 billion in January marked the second-highest total for the month of January, behind $78 billion in 2017. That output followed on the roughly $14 billion issued in December 2021.

Middle market CLOs saw improving credit metrics in the fourth quarter, according to Fitch Ratings. This included declining exposure to triple-C and defaulted assets. The average exposure to loans rated CCC+ or below fell 0.8%, to 11.9%.

January usually sees higher store closings, as businesses that were able to eke out another month with holiday traffic face reality. The decline in January this year compared to last may be an encouraging sign. 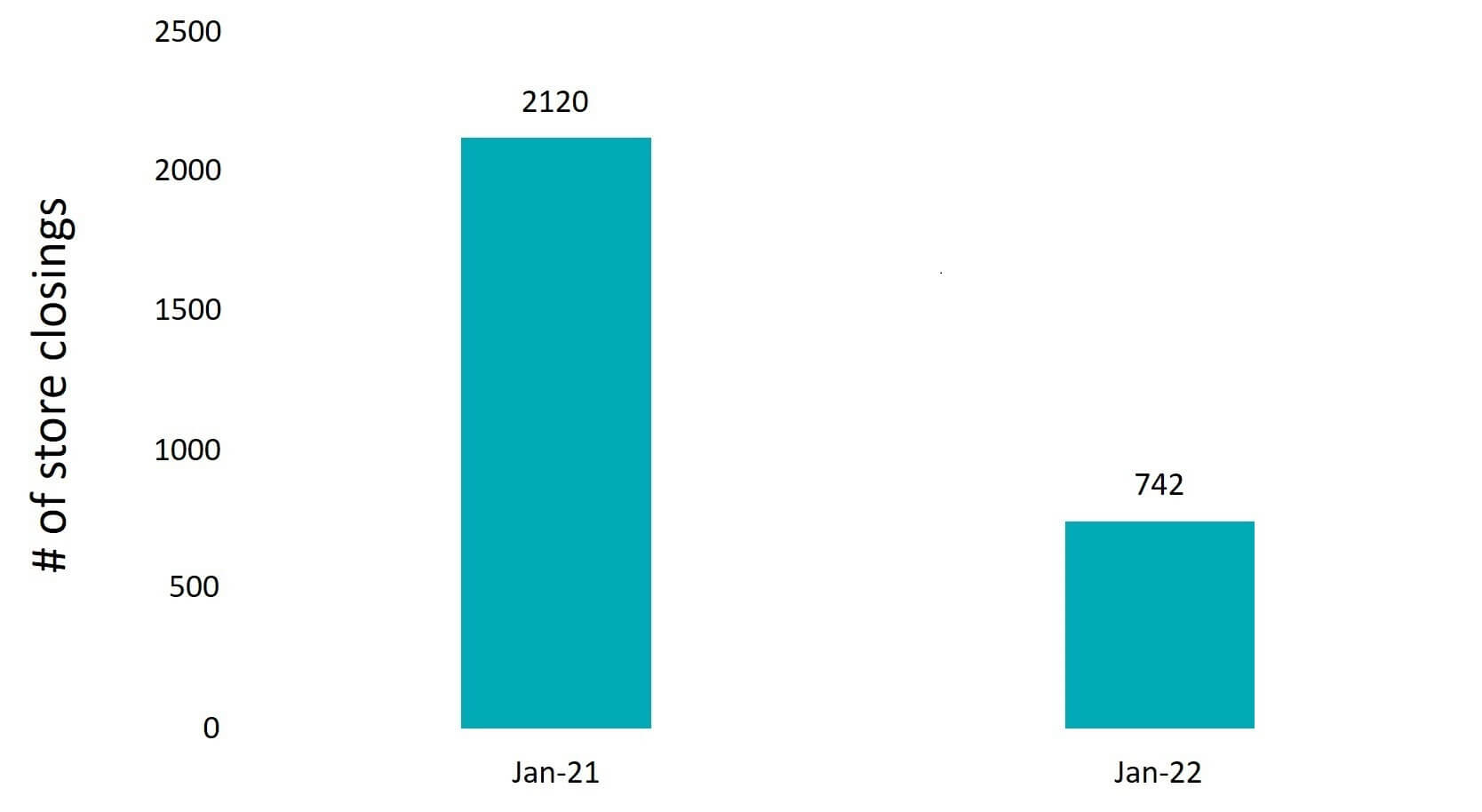 Shortwave: What We’re Tracking in February

Private debt has been making headlines recently, but Institutional Investor has the data on whether interest is translating to investor allocations. The conclusion: Yes.

Brands are seeking to create a presence in the virtual world. Apparently, it is your Grandpa’s metaverse.

Turns out Hellmann’s can bind anything together, including the NFL, Pete Davidson and Kanye West. And a good message, too!

An inflation print of 7.5% - the highest in 40 years – has made where to put cash even more of a problem. We’ve got some answers to what is causing the issue and what to do about it in our most recent Outlook.

Is the “middle market” moving up in size? What does Ares see happening to the size of the deals it is originating? Ares’ Head of Markets, Greg Margolies, shares his thoughts.